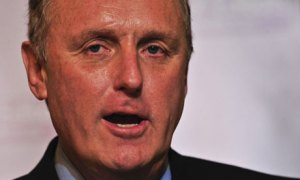 As many visitors to this site know, I am a big fan of the Daily Mail as they published my thing about cat food and grass. So I think I need to write something for the paper’s no nonsense, straight talking very astute editor Paul Dacre

But what to cook for someone as notoriously picky (this is what I’ve heard anyway, might not be true) as Paul?

Looking for inspiration I head over to my professional chef’s fridge and take a look inside:

And bring out a whole host of possible ingredients! 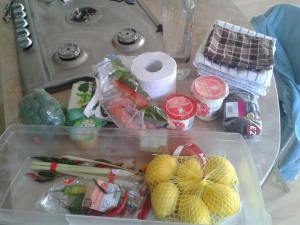 Anyway, lets have a think about what to cook and this is where Paul’s picky nature presented a problem. For example I couldn’t very well use the eggs because these are from single mothers. Right they’re out. I can’t use any of the ethnic ingredients because they’re ethnic so that’s the ginger, lemon grass, etc, out the window. Damn. I can’t use things that are imported like the Parmesan or lemons because Paul’s not a big fan of anything imported so they’re out. Bugger my shoes. I can’t use the single cream because it’s from another single mother and it has single in the title so that’s definitely out. Fiddle dee dee oh gosh darn it.

After many hours of weeping goodbye to some amazing ingredients I end up with the following:

The bottle of Goldshlager, toilet roll and carrots. Roger me sideways through a disused well this is going to be hard, but I reckon i can come up with an amazing idea using all these ingredients!

And here is that amazing idea: I’m going to host another cocktail party where I will serve a highly unusual crudite/dip along side a stunning drink!

I start by adding boiling water to some toilet paper: 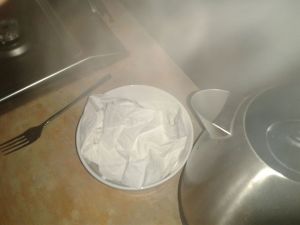 Then I chop some carrots:

The thing about the toilet paper dip is it turns out toilet paper is uncompressible so it really hurts your teeth when you bite into it. I try a bit on its own but can’t pick out any particular flavour. The carrots are nice and crunchy and the Goldshlager is really strong but that’s OK cos it’s super chilled and I can get drunk on it seeing as it’s Friday but I’m not sure Paul would be very impressed by my cocktail party and he would have left by now, if he ever turned up in the first place because I understand he’s not very good at turning up for things.

So, an interesting experiment. But what did you think? Have you eaten toilet paper? Tell us everything at the facebook page! Wooo!

One thought on “Cooking With Paul Dacre”