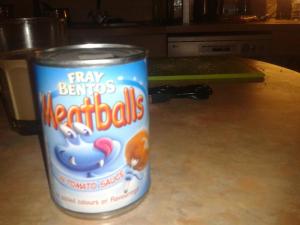 Following the spectacular popularity of my last Fray Bentos adventure I thought I would give another stable-mate the myfoodeeblog treatment. Here ladies and gentlemen, are some tasty meatballs!

So, what’s inside the tin? 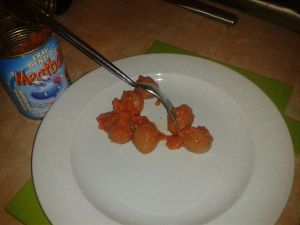 Eating cold meatballs straight out the tin isn’t something I would recommend. The meatballs taste pretty bland but it’s the texture and colour that gets you: slimy and grey. OTOH the sauce is palatable and tastes a bit like tomato soup, which isn’t surprising given that it’s an erm, tomato sauce.

So, what am I going to do with these meatballs?

After not much thought I reckon the meatballs will work as part of a yoghurt based Korma because the acid in the yoghurt should really cut through the slime of the ‘balls.

Next up I will finely chop some giner, garlic and half an onion: 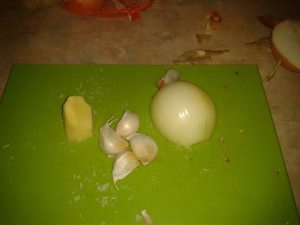 So once this has been done I add some meatballs, 2 tblsp yoghurt and some of the base to a frying pan:

Over the next 10 minutes I will add another 2 tblsp of yoghurt every 2 mins or so till I have added about 400mls (2 small cartons FYI). I don’t know why I can’t just add it all at once but the cook book says NO!

I finish the dish by stirring through some cream, blanched green beans and some fresh corriander. And here we go! Meatball korma!

But how does it taste?

The korma itself with its creamy, sour-ee, spicey-ness is really nice; it’s rich and tart and tastes legit. Pass. However, the meatballs are just stupid. They have such a rubbish texture and indistinct cheap sausage taste that I pretty much leave them alone and just eat the rice, green beans and sauce. Fail. I don’t know what it is about Fray Bentos and the meat they use. Is it meat? Maybe they have genetically engineered living meat sticks that they grow inside all their factories, which look like a meat version of Willy Wonka’s Chocolate Factory, except they have huge meat trees, lakes of blood, and brain bushes. I can totally see this. Meat trees.