During my last contract I spent enough time hanging around the staff kitchen to know that these rice cakes things were an integral part of any girl about town’s dieting regime. Ever since I have wondered “what is it about them that makes girls so miserable?”

So off I trotted to my local Tesco Metro to find out!

I know what you’re thinking, and yes, I have got some:

Wow! It turns out that polystyrene tasteless just like rice cakes, only chewier-er-er! No wonder those poor girls were so unhappy!

But listen girls, fear not! I’m going to give you some great ideas for your rice cakes that will amaze your office friends and make you the life and soul of any office kitchen lunch time!!

1. Wow your male colleagues by creating a stunningly realistic scale model of a 1959 Studebaker Coupé:

3. Build an iceberg for Mr Snowy to safely cross the warm sink of death:

4. Satiate your competitive urges by playing a paper plane throwing contest and when’s it’s your turn, laugh hysterically and throw your phone across the room! Ahem, sorry.

But being serious, I reckon these bad boyz might work as part of a rice cake and butter pudding.

So girls, pull up a chair, grab a glass of red wine and forget your diet cos we’ve got us a night out in calorie town! 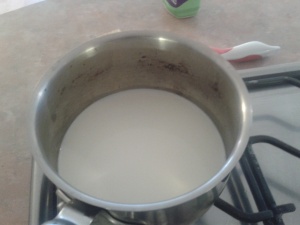 When the mix is just too hot to touch, I add to a mixing bowl containing 2 beaten egg yolks (NOT THE OTHER WAY ROUND!) and transfer the resulting mix to another bowl containing some broken rice cakes/polystyrene:

I then bake in an oven for 60 mins at 70 degrees C (this is Anton Mossiman’s favoured way of doing it because it doesn’t over-cook the custard).

After removing from the oven what do we have?

And how’s it taste?

I reckon my professional chef’s oven was on at about 90C because the custard has split slightly, having said that it still tastes nice. The rice cakes I guess are tender but have a chewy consistency and slightly malty taste which I don’t like now. So overall, I’m going to give this a marginal fail. But! follow these instructions with nice panettone and you will have a kick-ass bread and butter pudding!

Do you have any top office fun tips? Are you on a diet and are horribly unhappy? Then why don’t you head over to my Facebook page and share your troubles?

2 thoughts on “Snack a Jacks Rice and Corn Cakes”