We went right off radar for breakfast before my GF’s job interview when we went to Starbucks for a latte and a tiramisu dessert, but it was convenient and in the location of the meeting so n’ya!

For lunch we went to some India/Malaysian buffet place where one was given a stack of rice to which you could add whatever you wanted from the food counter. I opted for a bit of everything:

So it might look like a plate of sick but some of it was really interesting; there was a nice delicate and piquant vegetarian curry, a really nice bean salad and I think a papaya curry. The only not so good thing was that red stuff which was anchovy curry which tasted like cat food. Cost including a drink: 2 pounds.

For dinner we headed over to another place recommended on this website called Seng Kee, famous for its claypot pork and noodle dish.

Before we ordered we checked out the usual condiment suspects: 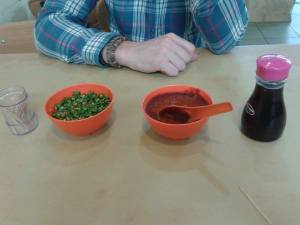 And then off to the main event!

The pork mince was really rich and the egg yolk really helped to make this a most filling dish; for me, the noodles were a bit slimy but GF liked them and said they were called ‘rat’s noodles’ by the Chinese, so use that fact in your next pub quiz I say. Cost including 2 drinks: 3 pounds.

Finally we headed home and picked up some mangosteen fruit on the way:

These were really really nice and I’m pretty sure they’re related to chestnuts; they taste a bit like very sweet kiwi fruit with a texture of lychee with maybe a hint of banana. They were very creamy and the Malaysians refer to them as ‘the queen of the fruits’, according to GF. Cost: 1 pound for 6.

Today we headed off to Penang on an airplane!

When we arrived in George Town we found a small Chinese restaurant down a back street and ordered a whole bunch of food. 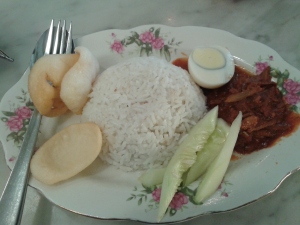 This is Nasi Lemak with coconut rice, prawn crackers, half a boiled egg, and cucumber. I didn’t like it because there was anchovies in it and I think anchovies taste like cat food, but the rice was really nice I suppose.

Then we ordered some Tom Yum ‘on fire’ (as you can see):

I’m not sure what fish it was but it was deep fried before being put in the sauce; there was also baby sweetcorn, small and very sweet red onions, some fruit (GF and me are having an argument as I type this “it was NOT guava”) and a whole stack of mint. I was very impressed with this dish and I will try and make it when I get back to the UK, though no doubt I will mess it up in some way, ‘natch.

My GF also had the genius idea of ordering sago made with honeydew melon and cream: 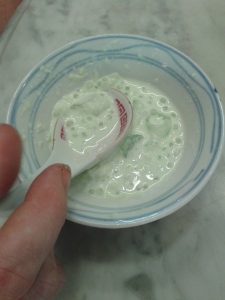 This was all kinds of win and I want some more NOW! Very melon-y and rich and awesome.

Cost of meal including 2 drinks : 4 pounds.

Into the evening and we got the worlds worst taxi (total scamming bastard who ripped us off to the tune of 4 English pounds sirrah!!) into Gurney Drive:

We had all kinds of different stuff at the hawker center, including:

Char Kuay Teow: fried flat noodles with prawns, bean sprouts and egg. It was nice enough but nothing to write home about (which I am in no way doing in this blog FYI).

Next up it was a chance to see the worlds biggest pyromaniac play with satay! 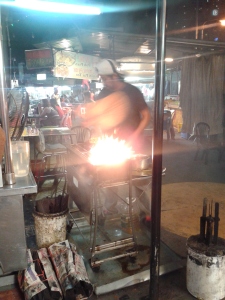 Pyro-boy made us some delicious ‘lightly smoked’  beef and mutton skewers: 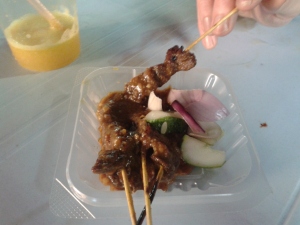 The mutton was very nice and had a slightly denser flavour than lamb; the beef was tender and the charring (and I use that term lightly) gave it a deep, bitter edge that contrasted wonderfully with the sweet satay sauce.

Finally we had some Nasi Goreng: 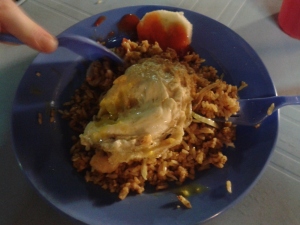 This was OK, but there were frigging anchovies hiding in it and every time I ate one all I could taste was the aroma of new carpets / cat food; can anyone tell me why Malaysians are so fixated with these horrible things?

Cost of everything this evening – excluding taxi – approximately 5 pounds.

So, phew! Days 5 and 6 out the way! But what do you think? Have you tried anchovies and think I’m being all down on them? Or maybe you have something I should try next in Malaysia? Either way, hit me up on Twitter.