So me and GF were in Langkawi and were all like “What shall we do today” when we saw this amazingly professional advert for a ‘Bad Cave Exploration’ and I was all like “what the hell is a bad cave exploration?” and my GF was all like “maybe the bats turn out to be flesh-eating monsters, never satiated until the last drop of human blood has been spilled” and I was all like “nah, it would be like that James Cameron film where they go to explore some caves and it rains and the caves get flooded and most of them die” . So me and GF decided to take a trip up a mountain and walk on something called a sky bridge: 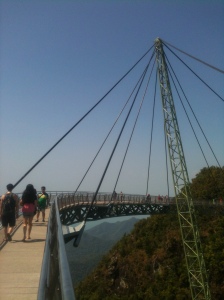 After getting a flight back to KL (cost: 11 pounds!!) we went to a very traditional Chinese food court where I ordered this: 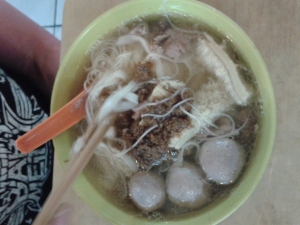 Beef noodles with an amazingly umami crumbly mince thing, tripe, seared beef, beef sausage balls. I have no idea what the crumble was but I suspect it was bone marrow fried and rendered down; it was amazing; the tripe was tender, chewy and a bit tasteless and the texture was furry which I didn’t like so much; the broth was good and the sausage balls were peppery and decent. 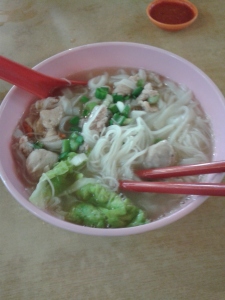 Chinese herbal soup or ‘pork noodles’. This was a much fresher dish and the pork had a really herby, interesting flavour. It also came with meat balls but they were less flavourful than my balls. But the soup base was light and complemented the other flavours well.

After a hectic few days hopping across various islands we were back in China Town in KL and GF suggested we go try some ‘chicken rice’ from the ultra traditional Kam Kee.

Despite being so simple, this dish was very intelligently put together; a deliciously light and aromatic broth, chicken with – I think – a honey sauce, all rounded off with flavourful rice. There were also condiments of mashed ginger, light and dark soy sauce, chili.

Cost including 2 drinks: under 3 pounds.

During the afternoon we headed out for coffee and I got bored and decided to order blended frog which was made using the pineal gland of the frog lithobates clamitans:

This was very interesting and tasted exactly like blended honeydew melon and ice, with a few jelly bits at the bottom which were probably parts of the frog’s brain, or something. Cost: 1 frog.

Onto dinner and we went out to a Japanese restaurant where we ordered some mixed fish carpaccio: 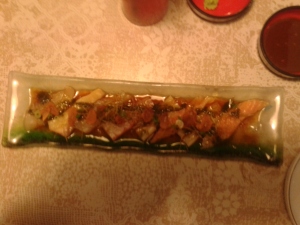 This was almost amazing but some of the fish wasn’t so fresh and the dressing tasted a little too much of cheap pesto, but overall it was still very nice.

Then I ordered some ‘beef cubes’ which came with cabbage:

This was just as dull as it looks.

Cost of both dishes plus 2 drinks: 14 pounds

When we got back to Petaling Street in KL I figured it would be a good idea to run a test and compare the tourist trap next door to our hotel to see how its food compared to the street food we had been eating. 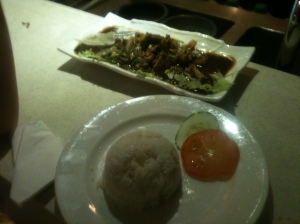 So there we go, I am almost through my epic food tour of South East Asia and have one more day left! Oh nose! And I do hope you have been enjoying my day to day reportage; if you have something to add, then why not comment here or on my Twitter account? That would be awesome!