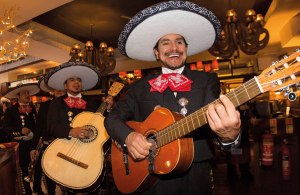 I was out with a friend who was also a girl and a mystery shopper and she asked me along to some top secret research gig at Chiquito’s Mexican bar and grill in Glasgow and I was all like Arriba! and shit like that.

After looking at the reassuringly authentic Mexican menu we decided to opt for some pulled pork tostadas. They sounded delicious and we imagined them to look just like this:

They were very nice actually, sweet and rich and cheesy! But the nachos and dips were cruelly ripped from our grasp by a keen waitress who said they were given to us in error. Bugger.

In fact it became quite apparent that wasn’t the only mistake the staff were making and quite a heated argument broke out over the enchiladas and melted cheese: 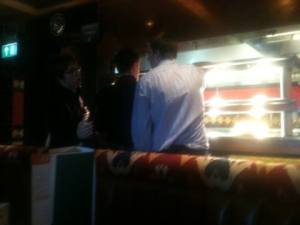 Suffice to say it took over quarter of a century for us to get our mains of chicken fajitas and some kind of wrap with cheese (and lots of it):

Although my chicken was a wee bit dry, the assortment of sauces allowed me to construct a fairly descent fajita; mystery girl’s wraps were not balanced properly and all I could taste was cumin. I suggested to mystery girl that she try them with hot sauce, which she totally did:

As you can imagine, eating this was a fairly messy process but that was OK because this is where the worlds tiniest napkin came in super handy! 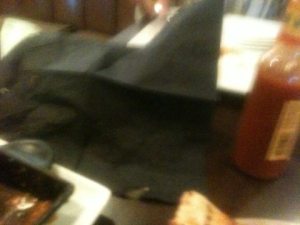 After all that hot food we needed something to cool down and what better than some delicious chocolate ice cream served inside a ….thing:

Which was meh and stuff.

Next up a Margarita cocktail and cup of tea!

I mistakenly opted for a slush puppy version and it wasn’t balanced at all and needed all of that sugar bowl to make it drinkable. Mystery girl’s tea was acceptable, apparently, so that’s something anyway.

Overall, a bit of a hit and miss affair over at Chiquito’s; very slow service but nice enough food; a relaxed atmosphere and probably one aimed more at the kidz than ninja critical mystery shoppers like us two.

So, have you eaten at this place? What did you think? Where should I review next? What was ‘thing’?

And when you’re done answering those questions, maybe you could nominate me for the Observer Food Monthly Best British Food Blog 2014 cos I think competitions like these need something like this!

4 thoughts on “The Chiquito Experience”