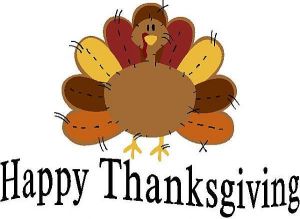 I was lucky enough to be in the USA for Thanksgiving, a national celebration all things not British. But a lot of my Polish, Korean, and Australian fans will have absolutely no idea what this amazing American tradition is all about! So here’s my take on things…

Thanksgiving began back in the day when the first settlers from Great Britain came to North America. In the early years, winters were harsh and food was scarce and the poor settlers didn’t know how to survive. One year was particularly bad and many of the new immigrants died. But luckily, some kindly native Americans took pity on the travelers and gave them yams, corn bread, wild turkey and …stuff. And lo! The settlers survived! So the settlers decided to thank the natives by systematically and indiscriminantly massacring them in their thousands and Thanksgiving (TG) is the celebration of this terrible crime against humanity! Team USA!

Anyway, here’s a few pictures I took during the day with assorted random commentary to give you a better insight into TG USA…(FYI HC=Homestyle Chef)

The night before HC brines a chicken (not turkey cos the flavor isn’t as good, allegedly). Brining introduces extra moisture to the bird and makes it super tender…

Next up I spotted some marshmallows which were going to be used in a dish with yams. Yamazing grilled yams with marshmallows and brown sugar! 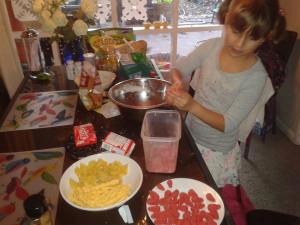 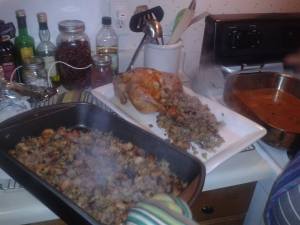 Another tradition is to make turkey cards and to wave them about during dinner. This recreates the ‘running of the turkey’ where Native Americans taught the settlers how to catch wild turkeys. This is true. 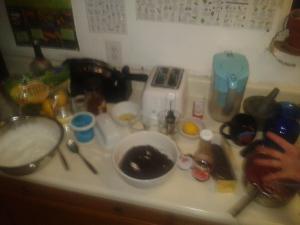 So here’s a dessert of whipped cream, pureed raspberry, and bitter chocolate. This doesn’t sound very traditional and that’s because I made it. 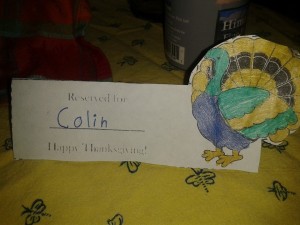 Another tradition is that everyone gets a placeholder with their name on it. This is so that everyone sits in the right place because in larger TG dinners fights can start when the wrong folks sit next to each other. 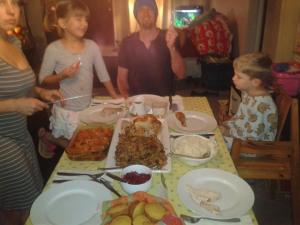 So here’s the final meal! In addition to the chicken and other stuff I mentioned we have mashed potato, corn muffins (corn meal flour, butter, honey, baking powder, eggs, milk, sour cream; super nice), cranberry and apple sauce, gravy, grilled yams and brown sugar…FYI HC is far left and looks really unhappy because she thought she over-brined the chicken.

TG is all about excess, so much excess, that son of HC began to cry at the prospect of having to eat so much…

Annnnnd how did it all taste?

Brining the chicken was a very good idea. It didn’t taste salty and made the meat much more tender; I really liked the stuffing and the corn meal muffins but thought the yam and brown sugar side was a little sweet; the cranberry sauce was a lot more tart than the ones we get over here in the UK but this was good because it cut through the richer ingredients.

In summary, I enjoyed my TG dinner and could compare it to our Christmas dinner save a few ingredients substituted for ones, such as yam for example, that would have been eaten back in the day by the early settlers.

So, maybe you’re American and have a few things to add about my take on TG or maybe you’re from everywhere else that doesn’t have TG and now know more than you did before… Either way, you can add your thoughts here or on my Facebook page!